That morning I awoke my mind still racing with images promising a chest of gold.  My 64 year old body was striking back, legs cramping, feet burning and fatigue from the hours spent crossing the river, wading in snow, and climbing under and over fallen trees, convincing  me no 79 year old would do the same.  There in Lamar Canyon home to an invisible bear with rather large feet and what appeared to be a grass diet avoided my double barreled pepper spray gun as I tried lining up a blaze in the canyon wall with some very inviting caves, tree falls and rock formations, when it struck me Fenn

Ok time to get real or go home.  Two weeks and two trips in that time I know I’m close but no cigar as they say.  Then I remembered what Fenn wrote about the person who will find his treasure.  To paraphrase he will analyze  the poem over and over then go with confidence to get the chest.  Last chance I say to myself as I was going back to the car.  After this,  just the long drive home through Montana then Wyoming, Denver Colorado and finally passing by Sante Fe.   Just, just, just oh, just water high and heavy loads, just the long drive home just not the place to be looking.  Now  like my athletic days it is game face time, confidence in my interpretation of the poem and with one mindedness, Its make or break it a last chance effort.  This in mind I head for the starting point, Soda Butte. 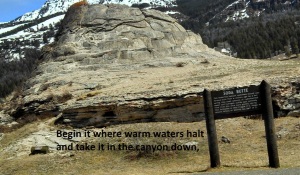 First stop Silver where a store has just opened.  I’m thinking coffee as I walk in and see an attractive lady at the counter. I tell her about the rangers  in Bear Canyon.  She says there are bears there and news travels fast in the Yellowstone.  Photographers come running to catch a bear on film and there must be ten or more just down the road as they snap shots of a female wolf filling up on an elk carcass just off the road.  I think to myself how lucky I am not to run into the Lamar Canyon wolf pack.  Hopefully Blaze’s offspring will stay higher up in  the canyon with the snow where elk and bear prefer to be this Easter Day.   I will walk past buffalo and chance a wolf pack but a bear, well a bear in spring time is not an animal I want to see anywhere I intend to go.   I stop one more time at Soda Butte to read the sign and resolve to find the treasure at the end of  the kind of walk Fenn could make when it was time to end his life and join his treasure chest of memories.  The next stop “the home of Brown.”

Here at Gary Brown’s old home I watch as a man about my own age makes and consumes a sandwich. I think here is a treasure hunter eyeing the valley a mirror image of myself  but he was leaving and I would soon be asking if that satisfied look on his face as he consumed lunch was in response to Fenn’s  suggestion to take a sandwich and a flash light.   I noted his Montana license plate before concentrating on the poem and following the exact directions.  Put in below, simple go down the road and put in below.  Ok, no matter what, I am putting in at the first turn out period, no guessing just trust in the poem.  Then there on the left it sat asking me what took you so long.  I parked and  looking to the valley I see a blaze of cottonwoods separated by a large number of buffaloes and a couple of small cold side runs of the river I knew my quest was soon to end.  Walking was easy and crossing the small side creeks just took a hop to get across.  The only thing that could stop me now, a bear or two.  The trees in the area have little bark from the clawing of bears and elk horns. How could a blaze in the tree last with these over size vandals dissecting man’s intended historical symbols such as UU or FF or a long legged frog.  Stay with the poem get to the blaze avoid the herd and watch for bears.  Easy, too easy I find it hard to believe its right in front of me.  The fifteen hundred feet went quickly as I kept looking for the place reported to have had groups pass by just five hundred feet from those trees.  Then I remembered a group leaving from a bigger turn out another half mile from the one where I had put in at.  They had stopped at  the river crossing at about that same distance.  Did they come back after they heard they were so close or was the man at the ranger station having a victory lunch?   Before I finished my thoughts I was at  the cottonwoods.  I tried to fight off the feeling I had been there before but I  knew what was next.  It was too easy how could it have taken so long to find.   The snow kept it covered till spring when anyone could see the blaze, the hole at the bottom of the tree.

Now I hear Fenn saying look quickly down.  I found the blaze,  look down,  down to the last tree, down to that blaze in that tree.  Heart beating quickly my mind telling me its gone you know that its gone.  But I can’t know that I have never been  here still inside that dreamy sense instantly insuring me it is gone.  Still drawn like a magnet pulls iron my feet knowing where to go I watch as they take me to the tree.

There it is and nothing else exist even time is stop.  One day on my friend’s clam in Idaho city as I studied the few gold flakes in my pan hunched over and squatting in the creek a black nose toughed mine startled,  I looked up to see Jim and his Labrador retriever.  Jim was laughing  he barely got his message out but his point  struck home ” your lucky he isn’t a bear.”  Bears, Wolves or angry lions had better get out of the way as nothing could stop me from meeting my  fate.  This was not a few flakes of gold this was the end of the chase.

Inside the tree the hollow was about a foot and a half lower than the ground and at the bottom in the peat was a perfect mold of a box  less than 10 by 10 inches and about 3 inches deep.  It was so perfect nothing in nature could leave such a print.  I couldn’t resist moving my hand through the sawdust.  It was cool and dry and fell apart easily.  I though a picture should be taken moments too late and I tried to remake the box shape back to what I first saw but it was impossible.  This print had taken time to form and now like the treasure its gone forever.  42 pounds inside of a small chest is something like a woman’s high heel the pressure on the ground bellow would be intense making as it did quite a dent add to that a couple of years to set and you would have a unique print.

Some will say it wasn’t there to begin with, others will think it fits the poem and Fenn’s life so well it must have been there. Only two people  can be sure, Fenn and the finder.  I have presented this for your own discernment.   I can’t get Fenn to answer so it will remain my own mystery.  Captpappy’s empty tree mystery.  Second place but first to disclose.  For those nay sayers  enjoy the chase that’s what is most important, as for me let me know if you want a partner to chase the next treasure.

My friend and writer asked me to leave this blog up until KUNM’s auction has ended but it will soon go away.  Till then enjoy and thanks to everyone who visited, it is great fun to see people from around the world come to read what Capt. Pappy had to say.

The 5th verse says if you are “in the wood.” The three references to the wood are: the three woods in the valley below Brown, the wood being the last set of trees before the canyon, and “in the wood” as the hollowed out tree that is the furthest down stream.  The triple references to “look down quickly” come when you look down at the tree, then down inside the tree that is down from the others.  And, then you are looking in the hollow where Fenn placed the treasure!

And so you may ask why am I giving away the treasure’s location?  To paraphrase what Fenn said, “been there, done that.”